Southern Ground Hornbills Bucorvus leadbeateri are large birds, sometimes weighing more than 6 kg and standing about a meter tall on tiptoe. With their glossy black bodies and bright red, bare facial skin, coupled with a bold and fearless demeanor, they are conspicuous wherever they occur. But many people who see them don’t know what they are, to the extent that in the Kruger National Park they now have an accepted secondary name, ‘Turkey Buzzards’. This comes from American tourists, ‘turkey buzzards’ is what many Americans call their Turkey Vulture Cathartes aurea, a species that does not occur in Africa.

Although related to other hornbills, Ground Hornbills belong to their own family, the Bucorvidae. Apart from the Southern Ground Hornbill, there’s a second species, the Northern Ground Hornbill Bucorvus abyssinicus, that replaces it in similar habitat north of the Equator. It has a large, open casque on top of its bill, a yellow patch on the side of its bill, and blue and red (male) or entirely blue (female) facial skin. Unique features of the ground hornbills include not having carotid (neck) arteries, and walking on their tippy toes. They have very long, dense, impressive eyelashes, used to screen their eyes from the bright African sun. 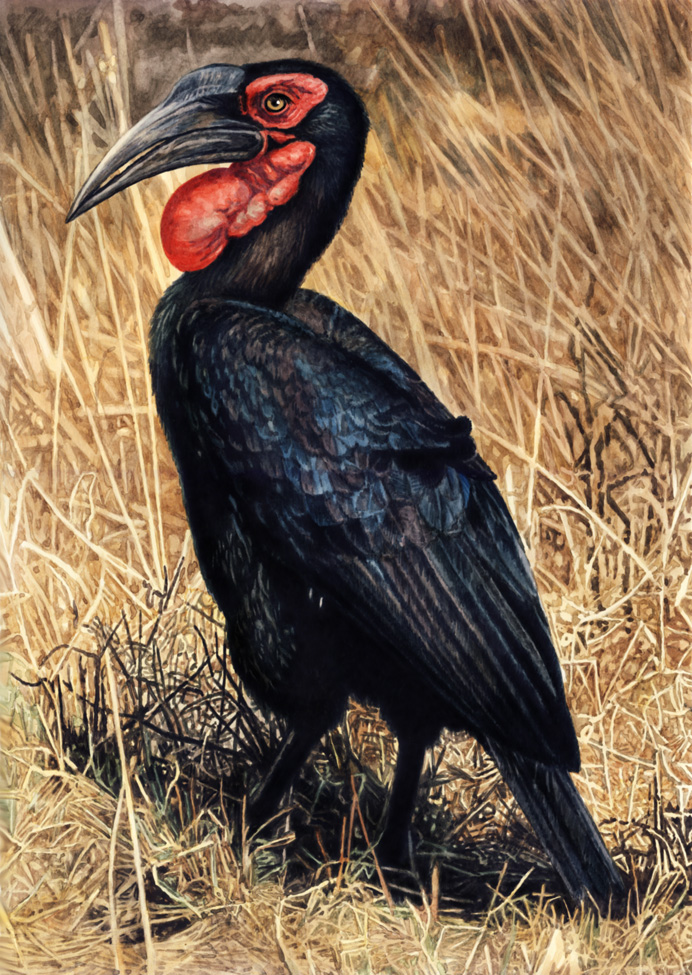 Ground hornbills, as their name suggests, spend most of their time on the ground, preferring open savanna and grassland regions. They can fly up into trees, in which case they display their beautiful white primary wing feathers, that are usually hidden beneath the overlying black feathers. Their legs are much longer than those of other hornbills and together with their long necks this enables them to peer over tall grass. They walk on their toes to boot, with the ‘sole’ of the foot lifted high off the ground. The result is a stately step, that gives an impression of justified pride.

They are formidable predators, going out in hunting parties of up to 11 birds. Their long, curved bills are very strong. Their prey varies from termites to big tortoises and even mammals like hares. They use their bills to dig around in the ground in search of invertebrates, frogs, or the honeycombs and larvae of ground-nesting bees and wasps. They also regularly probe around in dung, especially elephant dung, to look for dung beetles or their larvae. Sometimes ground hornbills eat carrion too.

Unlike many other hornbill species, the Southern Ground Hornbill does not have a large hollow casque on top of its bill, just a raised ridge. The function of amplifying its call, like a resonating sound box, is carried out by its big throat pouch instead. In the male, this is entirely red; in the female it has a deep blue central patch. These colours emerge only on maturity; in chicks and juveniles, the bare facial skin is grayish. The inflatable throat pouch enables the birds to give a particularly deep, booming ‘hoom hoom hoom hoom’ call, from which they get their Afrikaans name ‘Bromvoël’ (roughly translated as ‘Boom Bird’). Their call can carry up to five kilometers. From a distance, the call sounds rather like the roar of a lion. To mistake a hornbill for a lion is not as silly as one might think – as a bird lover realized to his shock when under the impression that he was approaching a hornbill, he stumbled upon a lioness!

Although they inhabit open habitats, these hornbills do need trees. They roost up in the branches at night, and also nest in big trees. The nest is a large, open cavity or hollow, often at the top of large trees like Baobabs. Thus these birds need ample open ground in addition to very large trees, a particular habitat requirement that makes them vulnerable to human disturbance, like the felling of trees for wood or bush clearing for agriculture. But they will adapt and can live in open farm fields provided there are big trees nearby. Indeed, ground hornbills can flourish in rural areas with traditional light farming and livestock herding.

Ground hornbills roost as well as hunt in pairs or small groups. To maintain group bonds, they call, exchange food items and preen each other. They start hunting at dawn, and cover about 11 km (7 miles) per day. Sometimes they make use of bush fires, catching small animals as they flee from the flames. They will also catch small creatures disturbed by large animals like elephants, buffaloes or rhinos, and can often be found foraging in close proximity to these large mammals.

Other interesting behaviours include sunbathing with spread wings, or bathing by rubbing themselves against wet leaves and grass after rains. Sometimes they accidentally step in thorns, which they pull out with the precision grasp of their bill tip. Immature birds will play with each other at the roosts, doing a kind of jousting with their bill-tips, chasing each other or jumping on each other. The birds typically fly to and from their roosts while it is still dark, so as to try and keep their roosting places secret from potential predators.

Other than baobabs, ground hornbills will also nest in other large trees like Marula, Boer-Bean, Thorn (the larger species), Yellowwood, Jackal-Berry, Sausage, Fig, Bushwillow or Star-Chestnut Trees. They rarely use cavities in rock faces or earth banks. The female incubates her eggs alone. But she has help! The male, as well as other members of the family group, regularly bring food to her while she incubates. This is the largest bird species in the world that breeds cooperatively. Sometimes the female leaves her nest briefly for the sake of personal hygiene, leg-stretching, and to find some food for herself. 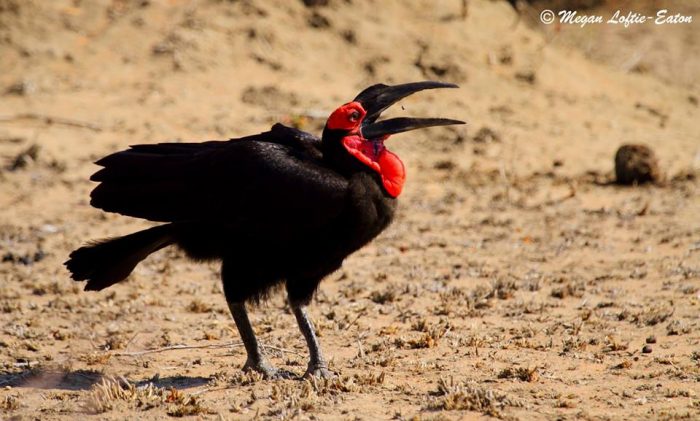 Although ground hornbill mothers always lay two eggs, it almost always happens in nature that only one chick survives. The chick stays in the nest for about three months, after which it joins the group. It stays in the group until it reaches adulthood, at about the age of 4 to 6 years. We still don’t know how long they live, but everything indicates that it is potentially quite long. They proliferate slowly – aside from the fact that they take long to mature, and that there’s usually only one breeding male and female per group, raising only one chick per breeding attempt, groups don’t even necessarily breed every year. Chicks are threatened by a number of predators, including cat and snake species. On average it takes every group a bit over nine years to successfully raise a single chick to maturity!

Southern Ground Hornbills face many threats from humans, habitat destruction being one of the main threats. Many of these birds die from eating poisoned bait farmers put out for jackals, caracals or other predators. Some are electrocuted on power lines. In areas with buildings they are sometimes directly persecuted by humans because they attack house windows – they see their own reflections and peck the panes to pieces under the impression that it is another, strange bird. This behaviour can be prevented by painting the windows, or by putting wire netting in front of them. A lesser known threat faced by these amazing birds is that of forgotten landmines in African regions where civil wars wreaked havoc. Because they probe deep into the ground with their sturdy bills, they are at risk of being blown up by buried land mines. Landmines are still found in large numbers in countries like Angola and Mozambique, remnants of wars that are technically over, but are still killing people and wildlife.

Being big, prominent, active members of savanna ecosystems, ground hornbills are considered a flagship species. When they thrive, it is a sign that the environment is healthy. Luckily, there are some wonderful projects that aim to help Southern Ground Hornbill population numbers, such as the Mabula Ground Hornbill Project.

The Mabula Ground-Hornbill Project is working to slow the decline by:

Willem van der Merwe
Willem is a wildlife artist based in Polokwane, South Africa. He says, “my aim is simply to express the beauty and wonder that is in Nature, and to heighten people’s appreciation of plants, animals and the wilderness. I’m fascinated by wild things from all over the world.” View all posts by Willem van der Merwe →