Five days in the Northern Cape with a team of avid birders?! It sounds like a dream come true, and for me, that dream recently became a reality. Wednesday, June 12, a team of six citizen scientists (Jerome Ainsley, Chris Cheetham, Tino Herselman, Salome Willemse, Les Underhill, and myself) gathered in Handvol Gruis guesthouse near Calvinia in the Northern Cape for a 5-day BioBash. The previous BioBash here had been in midsummer. From Wednesday through Sunday, we aimed to explore as many pentads and grid cells in the surrounding area as deeply as we could. Though primarily searching for birds, we also took time to peek under rocks for scorpions and snap photos of passing springbok for the Virtual Museum. While, Jerome, Chris, Tino, and Salome focussed on atlasing for SABAP2, Les and I used the trip to collect VM data.

Each day, we set out before sunrise to photograph birds. For me, this week was incredibly exciting; I encountered several “lifers”, birds to add to the list of species I have seen in my life. These included Karoo Eremomela, Karoo Korhaan, Fairy Flycatcher, Black Harrier, Black-Chested Snake Eagle, and Martial Eagle.

A personal highlight, though, was Layard’s Tit-babbler—not a particularly uncommon species, but notoriously difficult to see and photograph. With a bit of patience, this one eventually emerged from its bush and perched just long enough for a BirdPix photo.

Among a bevy of larks, chats, canaries, and other common karoo residents, we did have a few surprising finds as well. One of these was a population of Cape Sugarbirds spotted by Chris, quite far north of their expected occurrence. We also encountered a Goliath Heron far out of its typical range!

Though each day held its triumphs, these were often overshadowed in my mind by a sense of loss. On the drive up to Calvinia, we passed a dry riverbed labelled “Droge leegte”, “Dry Void”. Driving through the karoo or even looking at a satellite image of the region, those two words seem apt descriptors for much of the landscape. The karoo farmland has been devastated by drought and overgrazing in the past decades, and local farmers are struggling to raise crops and livestock. These time-lapse images from Google Earth Engine show the changes in the landscape between 1984 and 2018.

As we connected with landowners and farmers along our routes, conversations constantly revolved around rainfall. We spoke to the owner of a sheep farm near Nieuwoudtville, who shared that their land received only 4 millimetres of rain in 2018. The difficult reality is that in many ways, this ecosystem is dying. Overgrazing has left its nutrients depleted beyond hope of restoration, and the warming climate brings less and less vital rain each year. As a result, those who do live on the land are faced with the difficult choice of either struggling to continue farming, or leaving their homes, often of generations, to start over again elsewhere.

On the first day of data collection, we witnessed both of these outcomes. On a remote but active farm, Salome and I encountered sheep that were starving, unable to subsist on what little vegetation remained. We also passed homes that were abandoned; drapes still hanging in the windows, goldfish still swimming in the pond. Throughout the week, these eerily quiet scenes served as the sobering backdrop to our work, reminders of the severity of the drought and the effects of unsustainable land use.

In spite of the hardship, I was struck by the resilience and kindness of the people we met. Residents readily connected to us through a mutual love of the land and the life it sustains, and were quick to offer information on the species they had encountered, the best locations to spot raptors, which roads to avoid, and more. 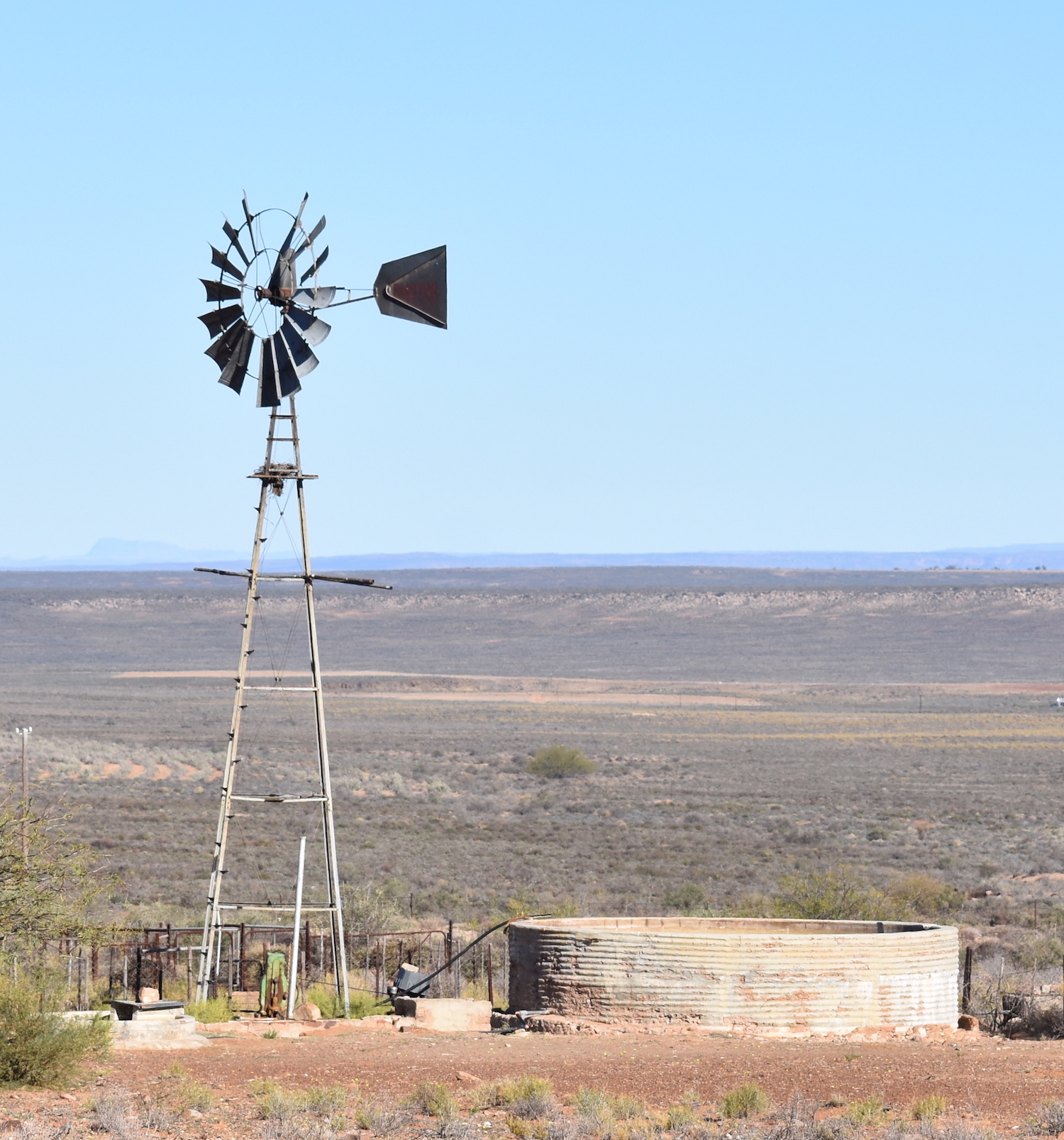 My takeaways from this (my first!) BioBash are twofold: I am deeply aware of the challenges facing this region of the country, but am also encouraged by the impact one small group can make in such a short period of time. Over the course of the week, the atlasing team (Salome, Chris, Jerome, and Tino) contributed 55 cards to SABAP2, and between Tino, Salome, Les, and myself, 840 records were added to BirdPix! The BirdPix additions are clearly visible in this map of the Namakwaland district municipality, which shows the number of species recorded in each quarter degree grid cell prior to and following the BioBash*. The diagram in the lower left corner shows the location of Calvinia (quarter degree grid cell 3119BD). 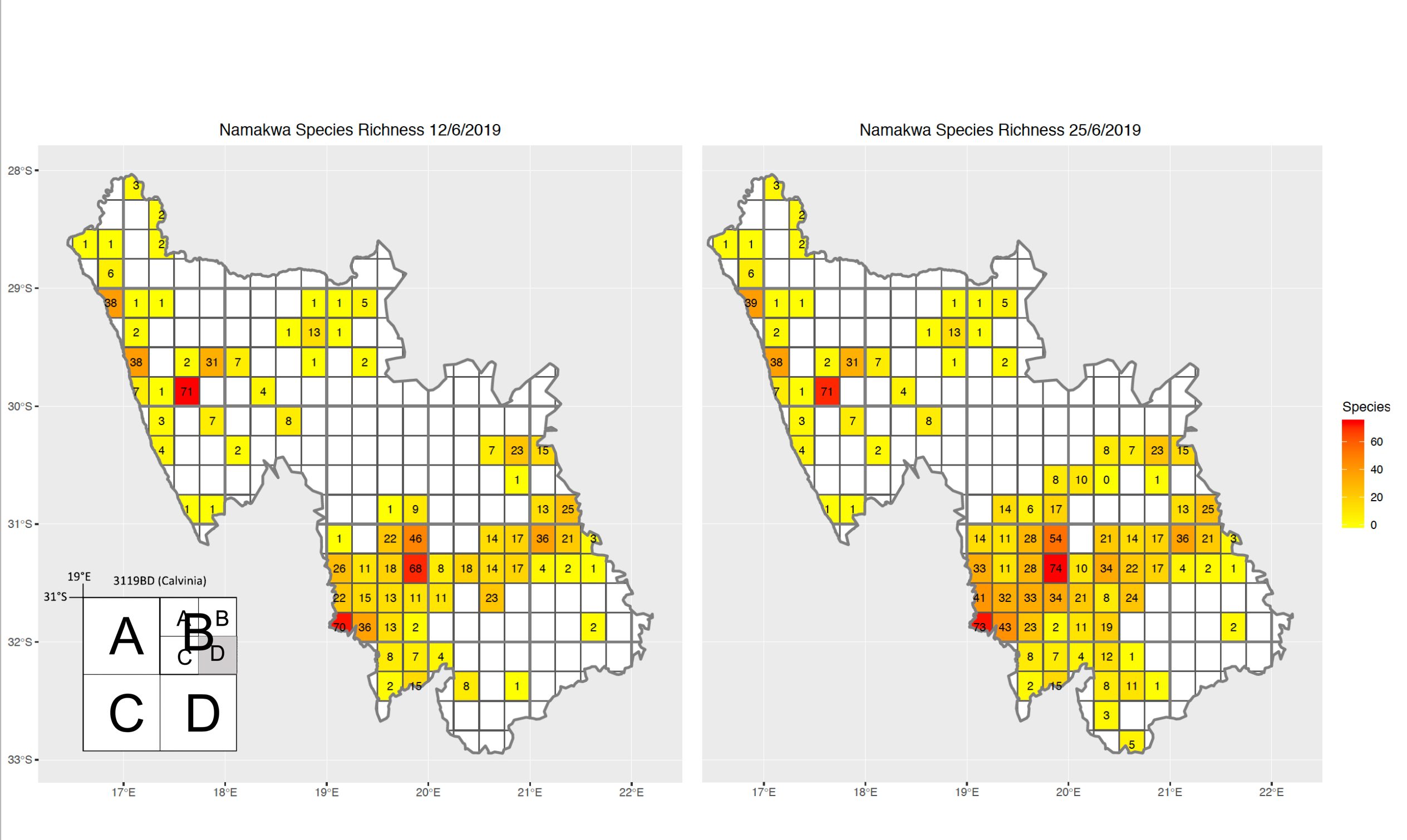 *The new map is not entirely up-to-date, as records are still being identified by the BirdPix team. It will be replaced with an updated map once all species ID’s have been confirmed.

To me, this success is just another beautiful reminder of conservation without borders: unique people united by a shared passion for the world around us. Even within our team, the diversity was incredible—we were a group comprised of statisticians, scientists, accountants, nature guides, craftsmen, and more! We need individuals from all backgrounds, disciplines, and cultures to generate strong and lasting conservation action, and projects like this are brilliant examples of what effective collaboration can achieve.

Karis Daniel
Karis Daniel has been fascinated by birds since she was young, but while she was at university they became a passion. On a study abroad programme in South Africa, she was captivated by the diversity and abundance of bird life she encountered, and ultimately found herself drawn back to study them further. She completed her undergraduate studies at Wilson College in Pennsylvania. In 2017, she also received the opportunity to study wildlife ecology and conservation at the Smithsonian Conservation Biology Institute, where she completed her honours research and developed a focus on conservation science. Karis is currently an MSc candidate at the University of Cape Town. View all posts by Karis Daniel →