Five years ago, the Post family bought a 5000 ha property in the Karoo which had been used for hunting, turned it into a biodiversity conservation area, and renamed it Roam Private Game Reserve. The old hunters’ accommodation has been transformed into a Luxury Safari Lodge that resonates with the hospitality and peacefulness of the Karoo. 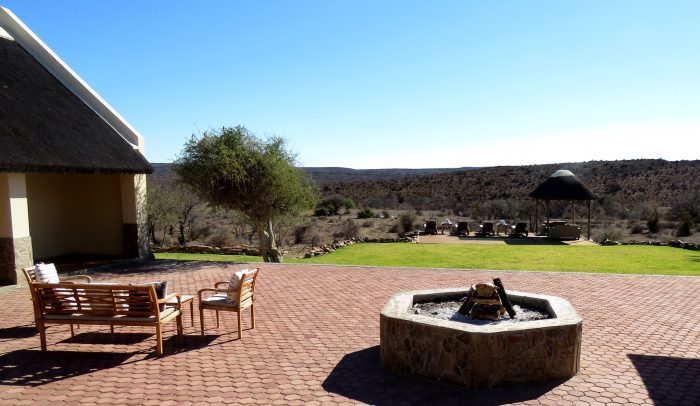 To satisfy the demands of hunters, what had originally been a sheep farm had been overstocked with large target animals. Veld degradation had been the result. This is steadily being repaired. Species that do not belong in the Karoo have gradually been removed. The overall population of large mammals has been reduced to levels that are sustainable. 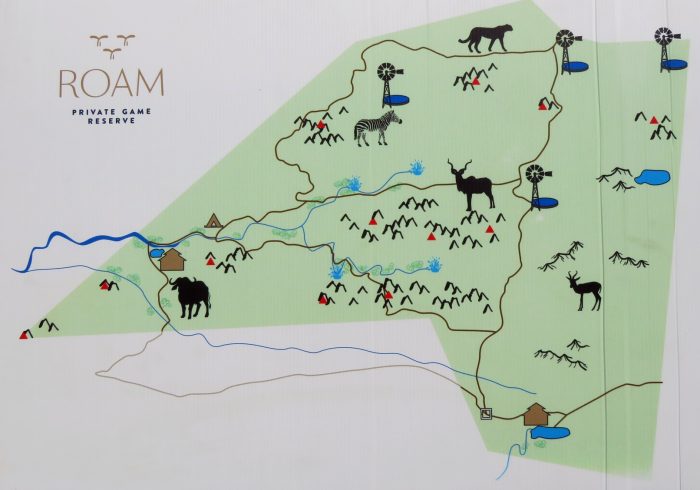 The quarter degree grid cell into which Roam Private Game Reserve falls is 3222CD, south of the N1 between Laingsburg and Beaufort West, and west of the N12 on its way south to Meiringspoort, and north of the Groot Swartberg range of mountains that forms the southern boundary of the Great Karoo. It is a particularly inaccessible grid cell for citizen scientists. There is bird atlas data for only three of the nine pentads in the grid cell. Prior to our visit, there was only a handful of records in the Virtual Museum. 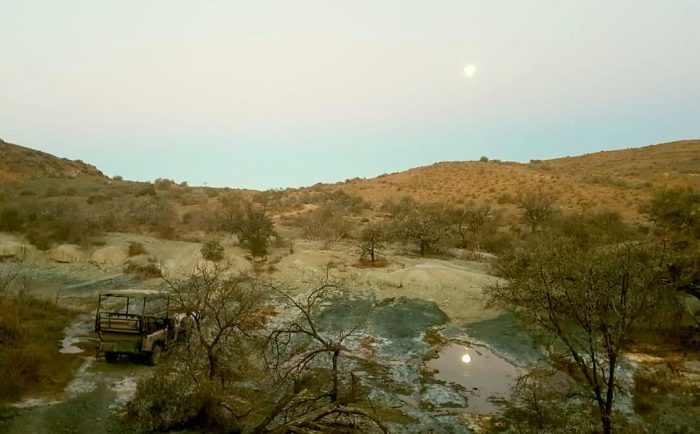 For most people, the caricature of the Karoo is a flat landscape dotted with “koppies” (i.e. hills). This is a rugged part of the Karoo, with deep tree-lined valleys giving rise to natural springs, that continue to flow even in the current deep drought. This is water that has probably not seen the light of day for centuries. It comes from geological formations far underground. This critical source of water is likely to be most at risk from fracking. 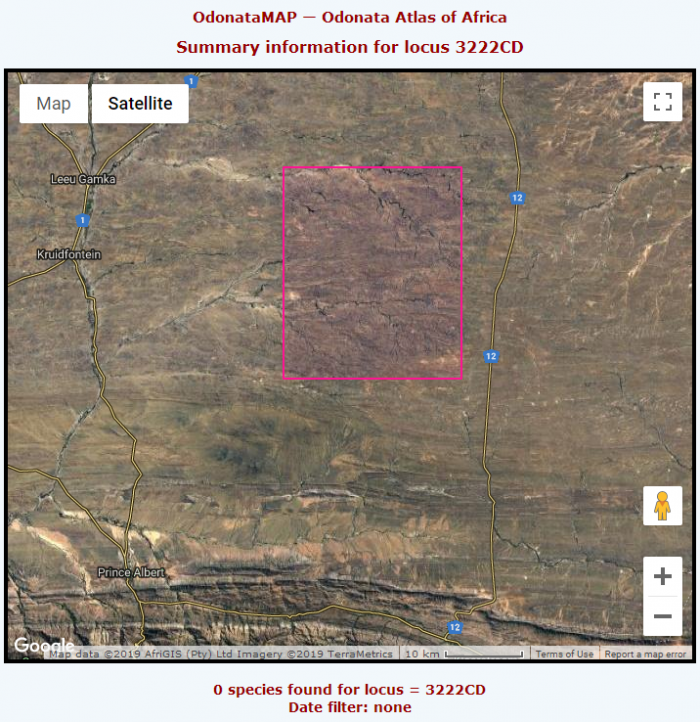 Roam Private Game Reserve would be a fabulous place to search for dragonflies and damselflies in the warm months of the year. OdonataMAP contains no records at all for this grid cell. Nor does either LacewingMAP or ScorpionMAP, and the Karoo is a known hotspot for these groups of species. 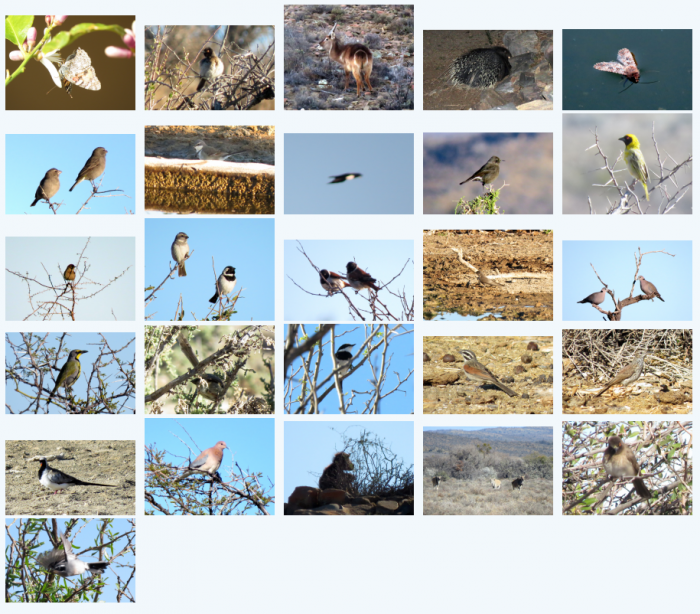 The managers on the reserve are Abigail and Donovan de Swardt. Soon after we arrived, Donovan loaded us onto the game-viewing vehicle and showed us some of the highlights. He had a stake-out where he regularly finds Fairy Flycatchers, but with us it didn’t deliver. Instead, the Fairy Flycatcher appeared the next morning in one of the shrubs at the lodge. This is probably the highlight record of the visit. Here is the record in the Virtual Museum: http://vmus.adu.org.za/?vm=BirdPix-88594. 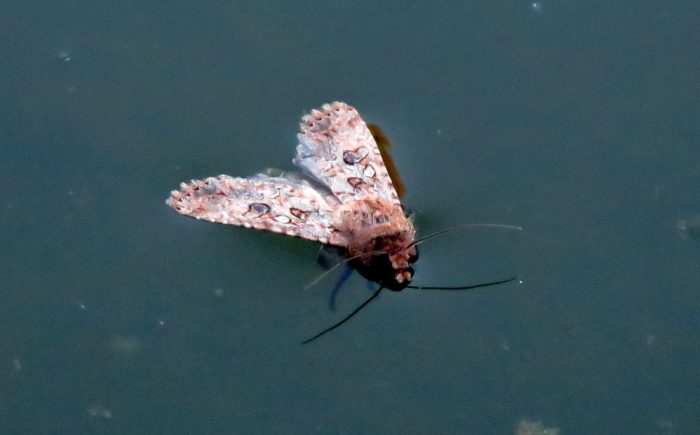 This is the first record of a moth from the grid cell and is now in LepiMAP (http://vmus.adu.org.za/?vm=LepiMAP-691619). It has been identified by Quartus Grobler as belonging to the genus Agrotis. Some of the members of this genus are one of crop agriculture’s most notorious pests, the cutworms. 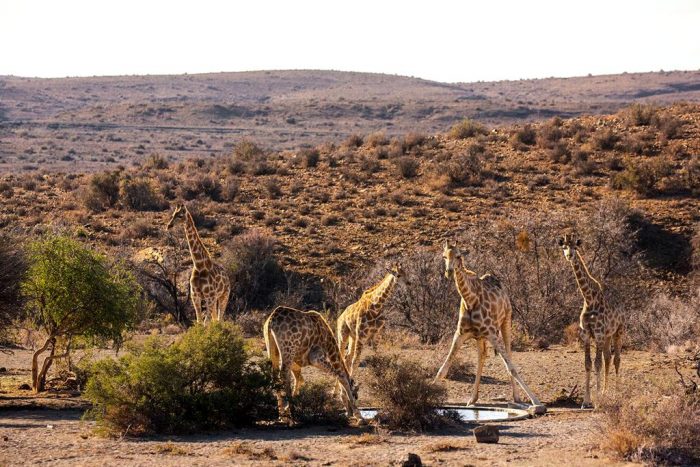 There are 12 giraffes, with three having been born in the nature reserve era. They mostly spend their time in the riverine trees along the drainage lines, but regularly visit the waterhole at the lodge. This photo was taken by Abigail de Swardt.

We are grateful to Denis Post for enabling us to visit Roam Private Game Reserve, and Abigail and Donovan de Swardt for their hospitality and enthusiasm.

With enthusiasm, the BDI is hoping that the Roam Private Game Reserve will become an outstanding site for student research projects. It has massive potential. Watch this space.