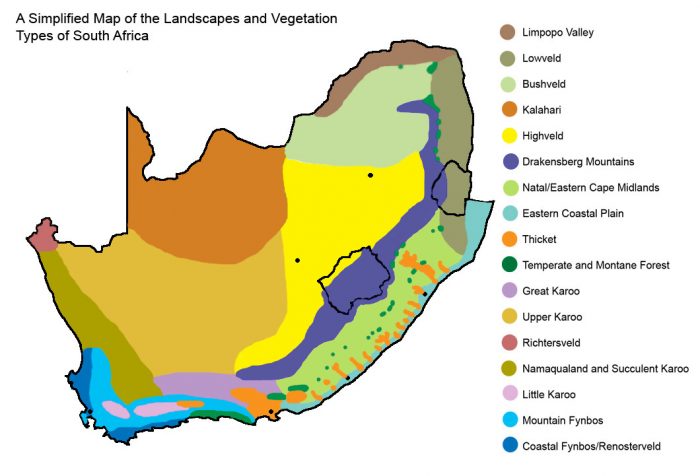 As a country, South Africa is mostly high and dry! High, in that most of the country consists of a central plateau, with relatively narrow coastal plains surrounding it. Dry, in that more than half of the country gets less than 500 mm (20″) of precipitation per year, on average. Thus, South African landscapes tend to be mountainous, rocky, and rather barren. But there are savannas, grasslands and forest patches as well.

Let’s consider the central plateau first. This vast plateau stretches throughout all of South Africa’s nine provinces. Towards the south and west, it is a semi-desert region known as the Karoo – which in itself consists of several different vegetation zones. The northern and eastern Karoo is grassier, while the southern and western regions are characterized by succulents and shrubby plants. The typical Karoo is a flat, high plain, with widespread flat-topped hills. The hills are remnants of an even higher plateau most of which has eroded away over millions of years. The Karoo is ancient, and has sedimentary rocks dating back to over 300 million years in which fascinating fossils are found of our own ancient ancestors, the so-called ‘mammal-like reptiles’ or proto-mammals. These rocks are remnants of sediments kilometers in depth that were deposited when the Karoo was a vast inland sea! Over time the inland sea dried up as the landscape was uplifted by thousands of meters through the process of plate tectonics.

Though barren looking, the Karoo has extremely interesting wildlife, and a wealth of succulent plant species. In dry years, the rocks and open patches of soil are evident, but a season of good rain transforms the landscape into a lush and green plant paradise. In the past the Karoo abounded with herds of large mammals, like springbok and black wildebeest, but their numbers were decimated through over-hunting by humans. Today the Karoo is known mainly for its big herds of domestic sheep. There is little cultivation in the Karoo as the average rainfall is so low and erratic. Small wild animals still remain, some of them being quite rare and threatened like the riverine rabbit.

The northern-central portion of the plateau is lower in elevation, and hotter. This basin extends into Botswana to form the Kalahari Desert. Not a true desert; it is a region of dry and sparse savanna woodland and deep, mostly reddish sandy soils. There are some extensive and occasionally very tall sand dunes in the driest parts of the Kalahari. The Kgalagadi Transfrontier Park, between Botswana and South Africa, comprises an area of over 3,6 million hectares which is one of very few conservation areas of this magnitude left in the world!

The park is known for its large herds of springbok, gemsbok and blue wildebeest. Rivers, lined with large Camel Thorn trees, only flow in years of exceptional rainfall. But plants like the succulent Tsamma melons, and a variety of tubers growing in the deep sand, store water that can be exploited by animals and humans. The San People, or Bushmen, thrived in this region for thousands of years as hunter-gatherers with a truly minimal impact on the environment, but their traditional way of life is threatened by the advancement of our modern 21st century lifestyles.

To the north and east, the plateau receives higher rainfall. The central regions, most of which are in the Free State Province, are high, cold grasslands. Much of this is farmland now, but there are still pristine areas. These high grasslands are known as the “highveld”. A typical highveld landscape is vast and flat, with tall grass waving in the wind. Trees are only found on the occasional rocky hills, or along the banks of rivers and streams. Towards the eastern Free State, western KwaZulu-Natal, and the country of Lesotho, the plateau rises up into the highest mountains in southern Africa, the Drakensberg Mountains. The Drakensberg consists of volcanic rocks that poured out of huge cracks in the Earth’s crust about 200 million years ago. The highest peaks exceed 3,000 m (10 000 ft) in height. They are truly spectacular, with sheer, dark grey, basalt cliffs over a kilometer in vertical height in many places. The annual rainfall here is very high, over 1 000 mm/40″ per year. Despite the high rainfall, there are few forests, because of the dry and cold winters and frequent fires. The Drakensberg has some of the prettiest flowers to be found in South Africa, and a host of endemic species.

Grasslands are the most threatened habitats in South Africa and worldwide. Much of South Africa’s grasslands have been lost to agriculture or forestry. This has been very harmful to the ecology and biodiversity in these areas. Grasslands are not just grass! They contain a wealth of other plant species: soft herbs and low shrubs, succulents, orchids and other flowering plant species, some with underground bulbs. Just after the first spring rains, when almost everything bursts into flower, these grasslands are fabulously colourful. They also support large numbers of wildlife, including the big and remarkable giant girdled lizard or sungazer, numerous mammals and a great variety of birds, including some endemic lark species. The marshy grasslands host elusive birds like cranes, flufftails and many others. The draining of wetlands as well as pollution from mining and other human activities have placed a lot of stress on these ecosystems and its wildlife.

North of the Magaliesberg range (Gauteng and North-West Province), and to the west of the northern Drakensberg, the ‘highveld’ gives way to ‘bushveld’, which is a savanna landscape of grass dotted with trees. Most of the trees are thorn trees, such as the flat-crowned Umbrella Thorn, which is typical of much of the savannas of Africa. Other typical bushveld trees include Silver Cluster-leaf, Red Bushwillow, Buffalo Thorn, Karee, and Marula. A particular feature of the bushveld are the many isolated rocky hills. These are often inhabited by rock hyraxes, small rodent-like creatures that are actually relics of a primitive kind of hoofed mammal that was once very diverse in Africa and included species as large as small horses! The rocky hills have unique plant life including many succulents, huge examples of which are the Aloes and Tree Euphorbias.

In PART TWO of this blog series we keep traveling through the rainbow of landscapes that is South Africa. Watch this space!

This blog was written by guest blogger by Willem van der Merwe. Willem is a wildlife artist based in Polokwane, South Africa. He says, “my aim is simply to express the beauty and wonder that is in Nature, and to heighten people’s appreciation of plants, animals and the wilderness. I’m fascinated by wild things from all over the world.”