Lump it or leave it, quarter-degree grid cells are entrenched in the mapping system of South Africa. In an article called “SA Mapsheet Referencing“, the government tells us that “each map of the National Map Series is identified by its unique number (e.g. 2830CB) … “. Quarter degree grid cells are also deeply entrenched in the biodiversity mapping of South Africa. The first bird atlas project in South Africa was the Bird Atlas of Natal, which collected data from  1970 to 1979. We have no idea why the coordinators of that project, Digby Cyrus and Nigel Robson, selected the quarter-degree grid cell system, but most subsequent biodiversity mapping (= atlasing) projects in South Africa followed their lead.

Often we know (or can easily use Google to find out) the coordinates of a place, but we need to know the “code” for the quarter-degree grid cell (QDGC) the place falls into. One of the objectives of this blog is to enable us to do this.

But first we need to know how the system works. The code for a QDGC has four numbers and two letters (and only A, B, C and D are used). 2830CB is an example. First, I will attempt an explanation in words, and then use two diagrams.

The four numbers, 2830, tell us which degree square we are in. 2830 is the code for the degree square with 28°S and 30°E in its northwest (top left) corner. Next divide the degree square into quarters. Call the two on the top row A and B, and the two in the bottom row C and D. Top left is A, top right is B, bottom left is C and bottom right is D. So the C in 2830CB tells us that this QDGC is in the bottom left corner of the degree square; call it section C. Repeat the process one more time. Split each quarter degree square into four, and label them A and B, C and D, in the same way. So the B in 2830CB points us to the top right quarter of section C. It’s a messy explanation, and there must have been far simpler ways to do this. But we are stuck with this “official” system, and we have to come to  grips with  it!

In diagrams, it is far easier to explain. These are the official diagrams. 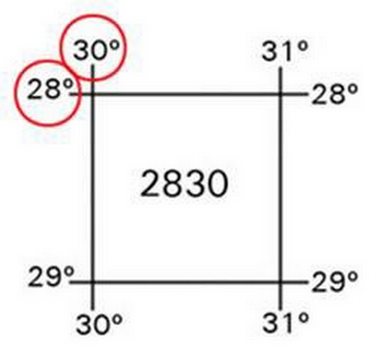 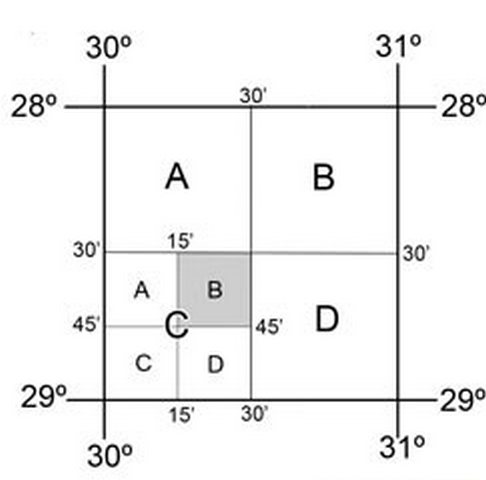 This diagram shows how degree square 2830 is divided firstly into four quarters, and how the first level of letters works. Then the bottom left quarter, section C, is subdivided for the second time, and quarter-degree grid cell 2830CB is shaded. Easy.  Now that you have seen the diagrams, read the explanation in words again!

Suppose now you want the Virtual Museum‘s list of the Lepidoptera, the butterflies and moths, which have been  recorded in QDGC 2830CB. The incantation you need to do this is

When you go to this website, the information you get looks like this, but it is bigger: 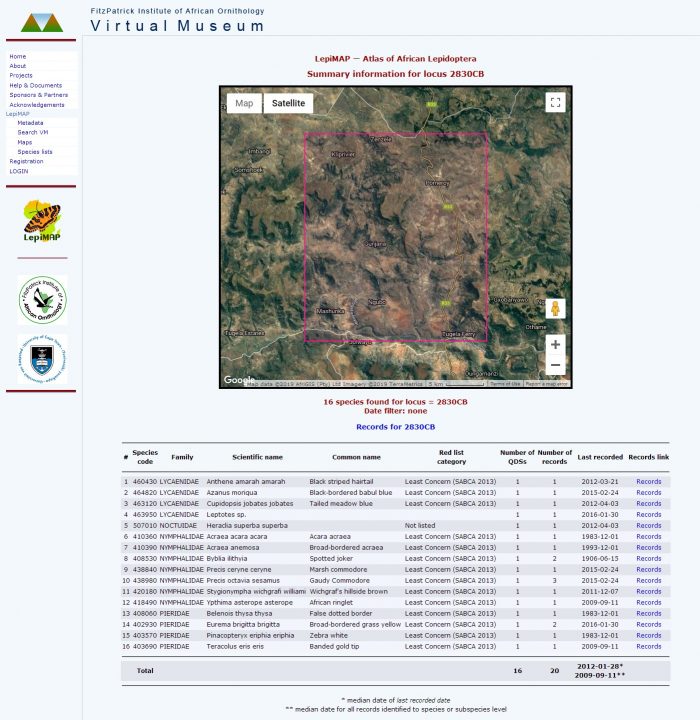 2830CB turns out to be in rural KwaZulu-Natal. The village called Tugela Ferry is in the southeastern corner. This website provides a map of the quarter-degree-grid cell, and a list of the species of Lepidoptera recorded. There are 16 so far. Unpacking the rich amount of information on this page is going to be the topic of another blog. This incantation works for all grid cells and for all the sections of the Virtual Museum. The two places where you need to make changes are in green:

You need to customise the project, and chose the QDGC (called a “locus” in the incantation). 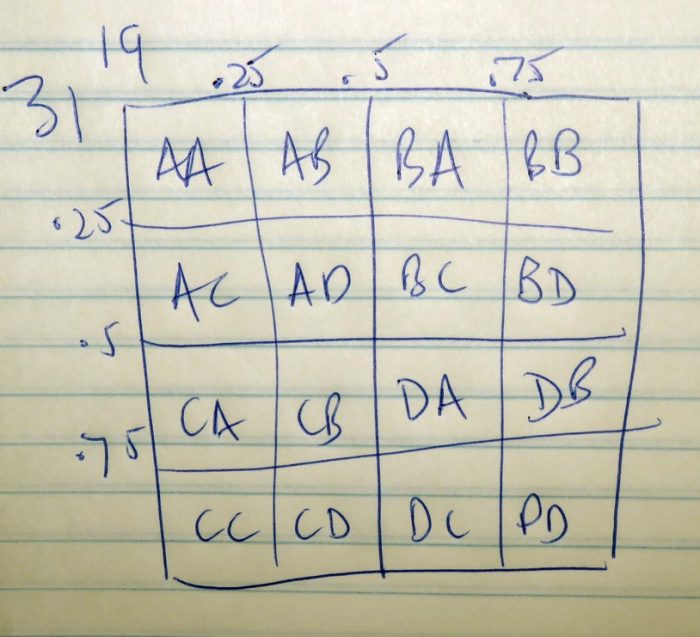 The fractions are in decimals (and NOT minutes). The left hand edge is the north-south part. The north-south fraction is 0.475, which lies between 0.25 and 0.5. So Calvinia is in one of the cells along the second row of the scribble (AC, AD, BC, BD). The east-west fraction is 0.773, which is bigger than 0.75 (along the top edge). So Calvinia is in the fourth column. The intersection of second row and fourth column is BD. So the code for Calvinia’s QDGC is 3119BD. Let’s give this a whirl for scorpions. The incantation is

It delivers this information 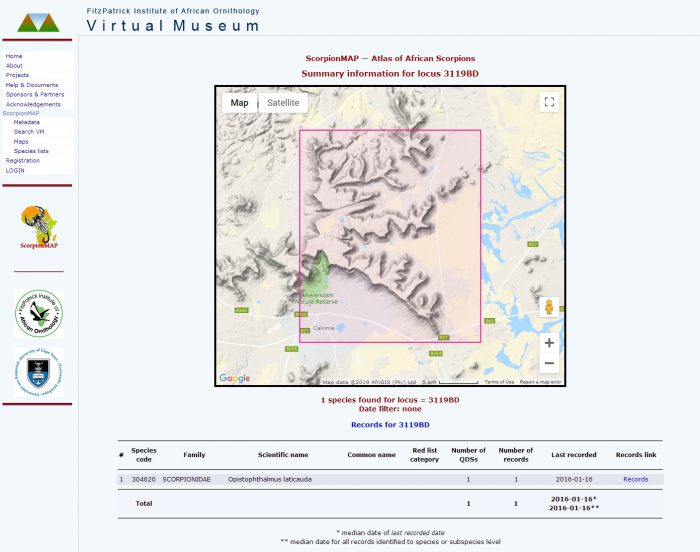 Gosh, there is only a single record of a scorpion recorded from this grid cell in ScorpionMAP. Fieldwork is needed!

The paragraphs that follow deal mainly with the complications of being in the northern hemisphere. Most readers can skim to the end.

A Norwegian geographer, Ragnvald Larsen, visited Africa. He thought our quarter degree grid cell system was the best thing since sliced bread, and devised a way to apply it to the whole world. If you google “QDGC”, the second item is his enthusiastic blog post. The first item is a Wikipedia article, in which the author(s) think of the QDGCs as “tiles” that cover the earth’s surface. This is quite a nice concept.

But there are two problems. The first problem gets really serious when you reach about 60°N or 60°S. Quarter-degree-grid cells are not really “squares”. In the north-south direction, every QDGC is 27.4 km long. On the equator, they are also 27.4 km wide. They shrink in width as you go north or south, because the lines of longitude get closer together, and converge at the poles: 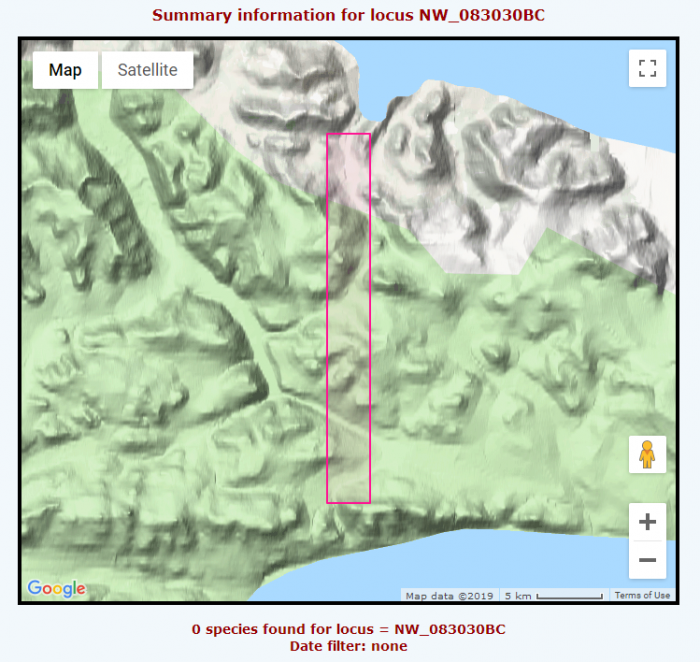 This is what a QDGC looks like in northern Greenland at 83°N! In the far north, and south, QDGCs get narrower and narrower because the lines of longitude all converge to meet at the poles. It would be unthinkable to do a bird atlas in northern Europe using quarter-degree grid cells. In this extreme example, in northern Greenland, the QDGC is still 27.4 km north to south, but a sliver of land 4 km wide from east to west.

But at the northern and southern ends of Africa, for example at Cape Agulhas, they are only a little narrower, at 23.0 km. So, throughout Africa, QDGCs are, for all practical purposes, approximately square.

The second problem is that codes like 3119BD assume that the 31 is south and the 19 is east. The system makes no provision for north or for west, and does not admit to the fact the east and west longitudes can be three digit numbers, as they are in Australia! Rene Navarro devised a universal system.

It is agony to think about it, but the actual layout of the scribble in the northern hemisphere, and in the western hemisphere has to be different. If you are north and east, like in Ethiopia, AA needs to be in the bottom left corner, because north is increasing from bottom to top. If you are north and west, like in Senegal, AA needs to be in the bottom right corner, because both north and west are increasing in the opposite direction to what it does in the south and east! It’s messy. 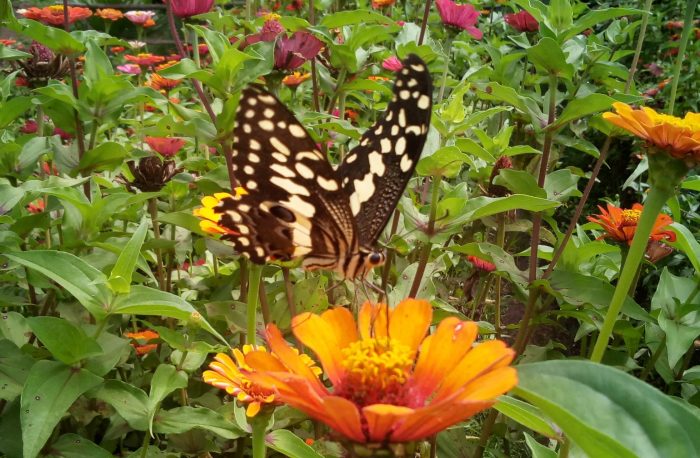 For  some light relief at the end of this blog, here is the butterfly from Ethiopia mentioned above. It is curated at http://vmus.adu.org.za/?vm=LepiMAP-678658 and was recorded in grid cell NE_010037BC. It is a Citrus Swallowtail Papilio demodocus, submitted to LepiMAP by Tesfu Tujuva on 9 April 2019. This butterfly has a range throughout Africa south of the Sahara Desert, and then extends northeast through the Horn of Africa as far as Oman in the Arabian Peninsula. Go to http://vmus.adu.org.za/vm_locus_map.php?vm=lepimap&locus=NE_010037BC to see where this QDGC is, and to find out whether other species of butterflies and moths have been  recorded here.

The QDGC system has proved exceptionally valuable for the purpose of generating maps of the distribution of species in southern Africa. We would love the maps to be on a finer scale, but for most groups of species (except the birds), the quarter-degree grid system is the best we can achieve with the available data. It is likely to prove useful throughout Africa. This is why we have extended the naming system so that it can be used throughout the continent (and even worldwide).

From the official mapping perspective, we have no idea who invented the system for naming the quarter-degree grid cells. But it has been in use for almost a century, since the first quarter-degree grid cell maps were produced by the section of government known at the time as “Trig Survey.” The system has stood the test of time. We have no choice but to get to grips with it.