Mwamba is the Conservation Centre of A Rocha Kenya. It is on the coast, and offshore is the Watamu Marine National Park. Just inland is the Arabuko-Sokoke Forest, the largest remnant of a dry coastal forest which originally stretched from Somalia to Mozambique. Just to the south of Mwamba lies Mida Creek, which has mangrove forests, intertidal sandflats and lots of waterbirds, especially migrant waders. The Mwamba Conservation Centre is a superb resource for conservationists, researchers, students, community groups and even holiday makers.  Over the years, it has developed a smorgasbord of practical conservation programmes; there are initiatives in scientific research, environmental education and community conservation. 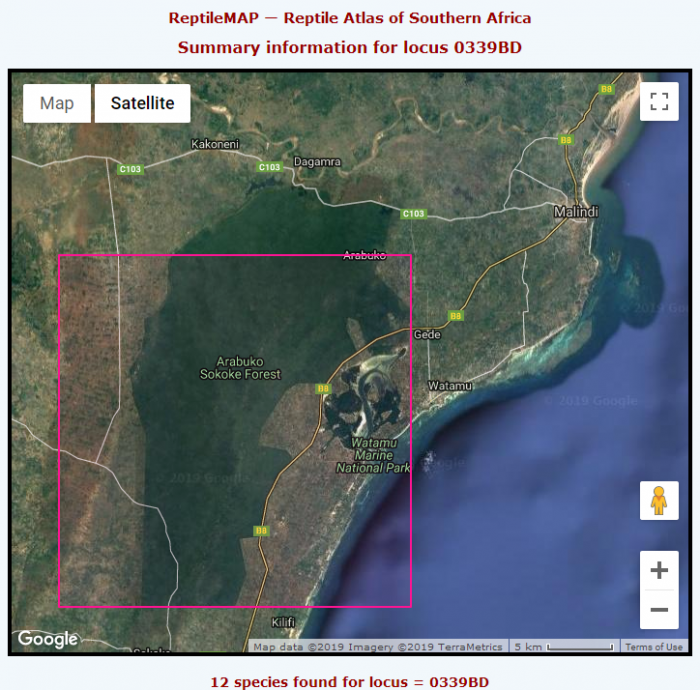 The Mwamba Conservation Centre is just inside the eastern boundary of quarter degree grid cell 0339BD, more or less under the U in the label for the Watamu Marine National Park. The boundaries of the Arabuko-Sokoke Forest are clearly shown in the Google image. Mida Creek lies between the forest and the sea. If you arrive by air, you fly into Malindi,  near the northeastern corner of the map. About 100 km to the south is Mombasa.

Dr Colin Jackson is the Scientific Director of A Rocha Kenya. I had supervised his PhD, which was entitled The moult and migration strategies of Lesser Sand Plover, Greater Sand Plover and Terek Sandpiper. Colin graduated in April 2018 and a substantial component of his data had been collected at Mida Creek. During a visit to Nairobi to participate in a Tropical Biology Association course, I took the opportunity to travel to the Kenyan coast and visit Colin “at home” at Mwamba, and also to make a belated pilgrimage to the study site at Mida Creek which we had talked about a lot.

In a place abounding with biodiversity, it was a great chance to make a contribution to the Virtual Museum. This blog is a small sample of the records. 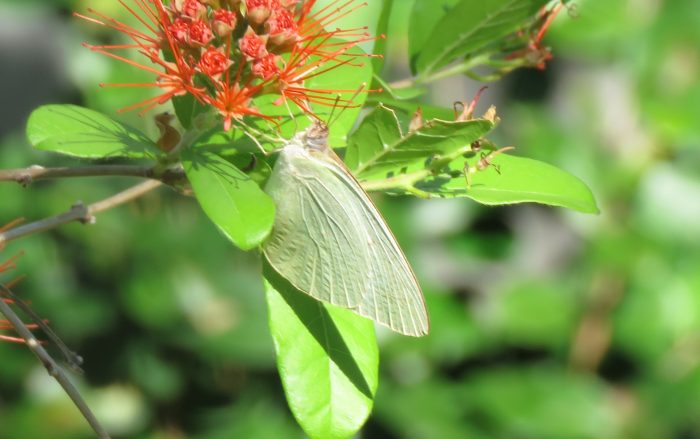 This unassuming butterfly is the African Migrant Catopsilia florella. As its name implies this is a migrant butterfly, but (like the Brown-veined White Belenois aurota) the migrations are one-way! It occurs through most of Africa. There are currently 3,982 records of this species in LepiMAP,  the Atlas of African Lepidoptera. But we need a lot more records to be able to produce a respectable distribution map. This record is at http://vmus.adu.org.za/?vm=LepiMAP-679725. 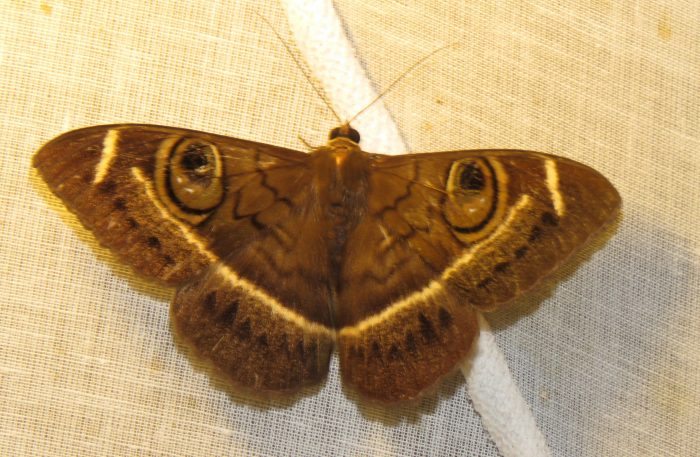 While I was at Mwamba, the commonest moth by far was Cyligramma latona. This moth is so well-known and widespread that it has an English common name: Cream-striped Owl. This large moth has a wingspan of about 80 mm. This “specimen” is curated in the Virtual Museum at http://vmus.adu.org.za/?vm=LepiMAP-679318. It was the first record of the species in quarter degree grid cell 0339BD. Currently 71 species of Lepidoptera (moths and butterflies) have been LepiMAPped for this grid cell. The full list is here http://vmus.adu.org.za/vm_locus_map.php?vm=lepimap&locus=0339BD. Colin Jackson says that 125 species of butterflies (let alone moths) have been recorded on the Mwamba property alone and that the Arabuko-Sokoke Forest is an even more magnificent destination for the lepidopterists.

On to reptiles! The Mwamba Conservation Centre has a designated “compost heap”.  I  am doubtful about the amount of compost produced … because it actually serves as the dining room table for … 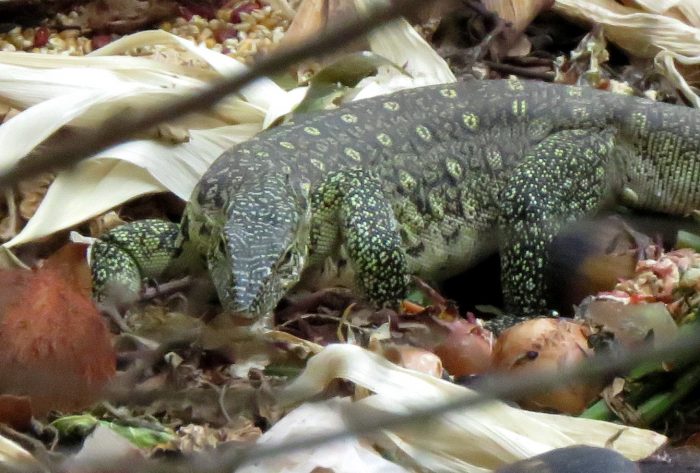 The grounds of the Mwamba Conservation Centre are similar to the others along this piece of coastline: about 4 ha in area, long, thin rectangles with about 100 m along the shore, and stretching back about 400 m to a main road parallel to the shore. Most of the area, across all the properties, is natural coastal vegetation, and it is used by birds as a coastal highway. Colin has set up a few mistnetting sites at right angles to the coast, and runs a regular bird-ringing programme that monitors coastal passage. One of these ringing sessions took place while I was there. 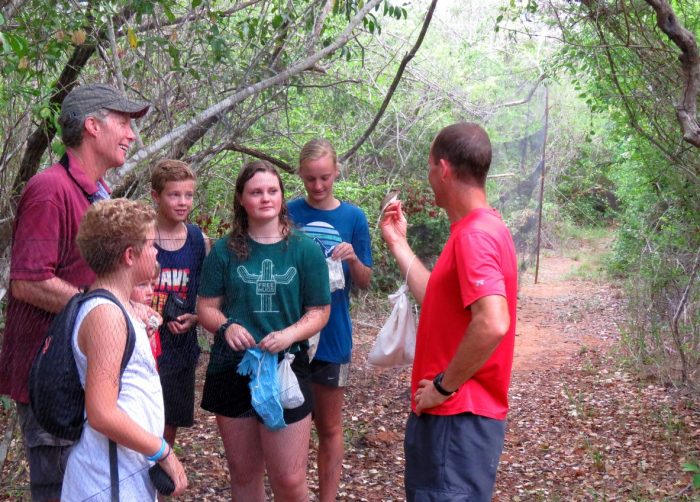 Bird ringing demonstrations have a long history of making people of all ages passionate about birds. Here, Jeff Davis, who teaches biology at the Rift Valley Academy, discusses the bird that he has just removed from the mistnet with the young people who were staying at the Conservation Centre at the time. 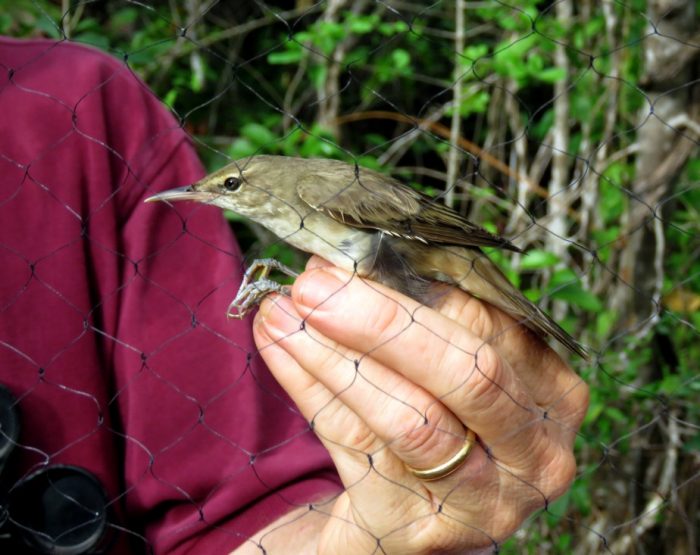 This bird left Colin amazed. It was the first Basra Reed Warbler Acrocephalus griseldis ever recorded at Mwamba. Its threat status is Endangered. This migrant has a large non-breeding range stretching from the Horn of Africa to Mozambique.  But it has a minute and shrinking breeding range in the Mesopotamian marshes of southern Iraq (amazingly, a few were found breeding in a reedbed in Israel in 2006).  This bird (but not this photograph) is curated in the BirdPix section of the Virtual Museum at http://vmus.adu.org.za/?vm=BirdPix-75886. 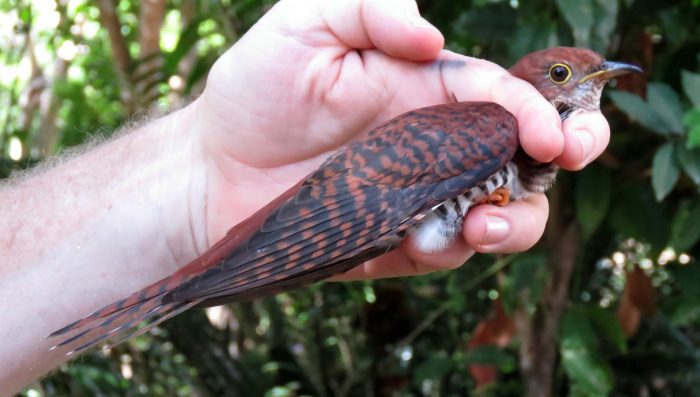 This is an (Asian) Lesser Cuckoo Cuculus poliocephalus. It has an unusual migratory pattern. This cuckoo breeds from Afghanistan, along the southern foothills of the Himalayas, in southern China and eastwards to Japan! They migrate southwestwards to India and East Africa, and are in Kenya from about November to April. This one, on 14 April 2019, would have been close to departure time. This photo, and two more, are curated at http://vmus.adu.org.za/?vm=BirdPix-75885.

Provided the winds and the clouds collaborate, flights in and out of Malindi provide a great view of Mida Creek. It is an inlet to the sea, and tidal, but there is no river running into it. Mida Creek has an area of about 3,200 ha, a combination of tidal sandflats and mangrove forests. 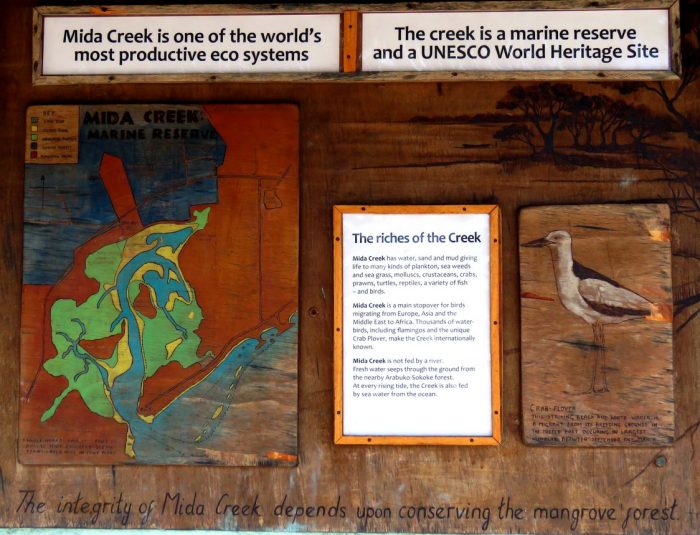 Mida Creek is both a stopover site for migratory waders on passage northward (with an April peak) or southward (with a September-October peak) and a migratory destination in its own right (with birds staying from September to April). It is one of the most important sites for waders along the western rim of the Indian Ocean. To the north, the next really important stopover site is Barr al Hickman in Oman, about 4,000 km away. 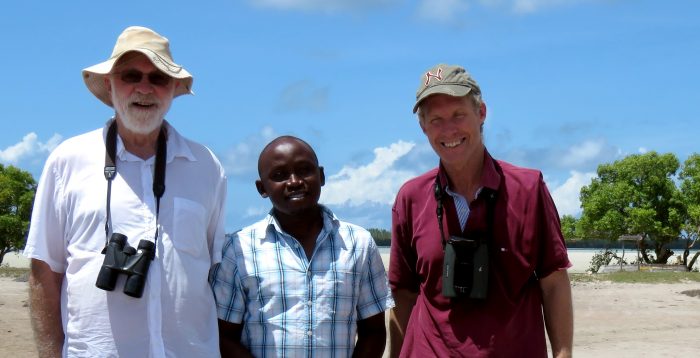 Juma Badi stands between Colin and me. He is a Community Guide. While Colin was in Cape Town finishing his PhD, Juma diligently collected one of the best data sets of its type in Africa. Every five days, for two years, he counted the waders along a 1 km transect across Mida Creek. This provided fantastic information on the timing of arrival and departure of waders. 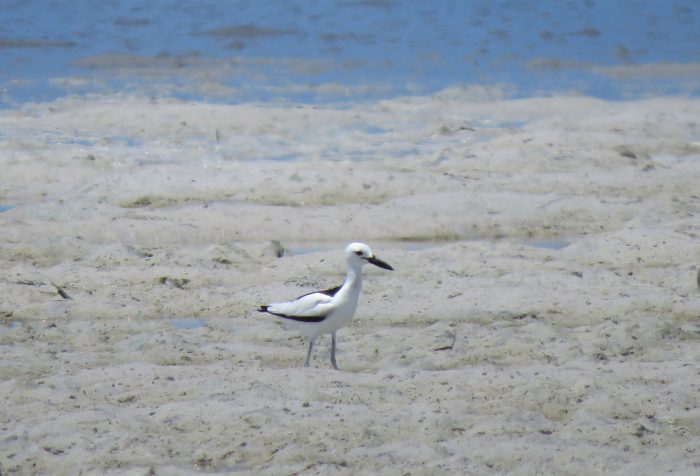 I saw my first Crab Plover at Mida Creek. Not just one, but hundreds. Mida Creek is a key non-breeding site. Curated at http://vmus.adu.org.za/?vm=BirdPix-75478. 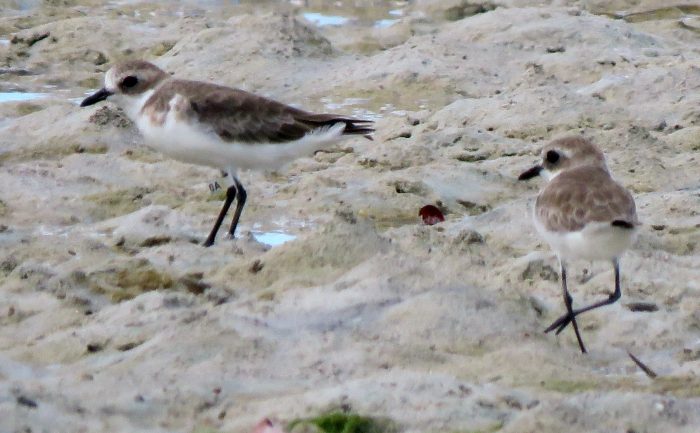 Here is a Lesser Sand Plover. It has a leg-flag and is one of Colin’s study birds. It is curated at http://vmus.adu.org.za/?vm=BirdPix-75479. Colin’s PhD considered the migration and moult of three species along the Indian Ocean “rim”: Greater and Lesser Sandplovers and the Terek Sandpiper at localities in Kenya, India and Australia. In comparison with wader species which migrate along the coastlines of the Atlantic Ocean and Pacific Ocean, these species are poorly researched,  and Colin’s thesis helps fill an important gap in knowledge.

Colin also placed leg flags on Greater Sand Plovers. On 16 September 2013 he added a ring flag to a bird he had first ringed at Mida Creek nine years earlier. It was resighted on the shore in Kutch, India, on 10 April 2015. It  was resighted the following year on the same beach in India, on 29 March 2016. Great Sand Plovers breed in Kazakhstan and western Mongolia. The full story is here! 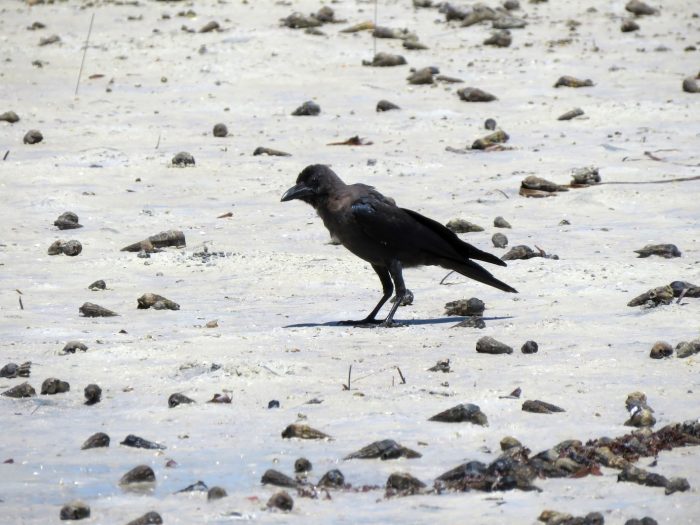 Colin was surprised to see a House Crow deep into Mida Creek, and quite far from  any human habitation. It was at the interface between the mangroves and the mudflats. This invasive alien started its African career at Mombasa. It is now so pervasive that there is no chance of eradicating it. This record is curated at http://vmus.adu.org.za/?vm=BirdPix-75411.

The photographic bird list for the grid cell is currently 31 species, so there is lots of opportunity to push it higher: http://vmus.adu.org.za/vm_locus_map.php?vm=birdpix&locus=0339BD.

We will explore ways in which the Biodiversity and Development Institute can collaborate with A Rocha Kenya, and especially at the Mwamba Conservation Centre.