It was a great privilege to be part of the team teaching at a course for the Tropical Biology Association in Nairobi during April. The course was called “Analysing and interpreting citizen science data.”

The Tropical Biology Association (TBA) is making a fantastic contribution to capacity building for biodiversity conservation in Africa and southeastern Asia. The impact of the TBA is awesome, and browsing its website is an inspiration. It punches way above its size. The TBA has helped launch the careers of more than 2,000 conservation champions. My Nigerian PhD students have talked to me enthusiastically about the TBA courses they participated in.  For example, Dr Zingfa Wala, who did a four-week TBA course in Madagascar, says: “The TBA course is the one that had the most impact in my career. It exposed me to practical and hands-on experimental design.  It was my first experience working with a team and it opened up great networking opportunities.”

But back to Nairobi, April 2019. The course I participated  in was advertised as Citizen Science in Africa – making it work for conservation. The TBA motivated this course on their website: “Across Africa, citizen science is producing a growing body of data and inspiring significant numbers of people to connect with local and national conservation issues. This exciting development has led to an urgent need for training to enable African scientists to analyse and interpret these data in order to generate useful outputs to inform practice and policy.” The course was a partnership between the Tropical Biology Association, the National Museums of Kenya, the British Trust for Ornithology and the Biodiversity and Development Institute.  It was funded by Cambridge Conservation Initiative.

An indication that the TBA had identified a genuine need is the fact that more than 200 people applied, 10 times more than could be accommodated. The 22 participants who were selected came from 10 African countries: Liberia, Benin, Nigeria, Cameroon, Congo, Uganda, Kenya, Rwanda, Tanzania and Botswana. We gathered at the National Museums of Kenya on Monday 8 April for a week-long course that started at 8 am each morning and finished at 5 pm.

Two sets of numbers from 1 to 11 were placed on the tables, and each participant had to find the other person with the same number, and introduce that person. Clara Cassell from Liberia got paired with Judith Mirembe from Uganda.  Judith told us that Clara does yoga, and Clara told us that Judith plays hockey. Judith is also leader of Uganda Woman Birders and was recently featured by the Audubon Society: https://www.audubon.org/news/when-women-run-bird-world. 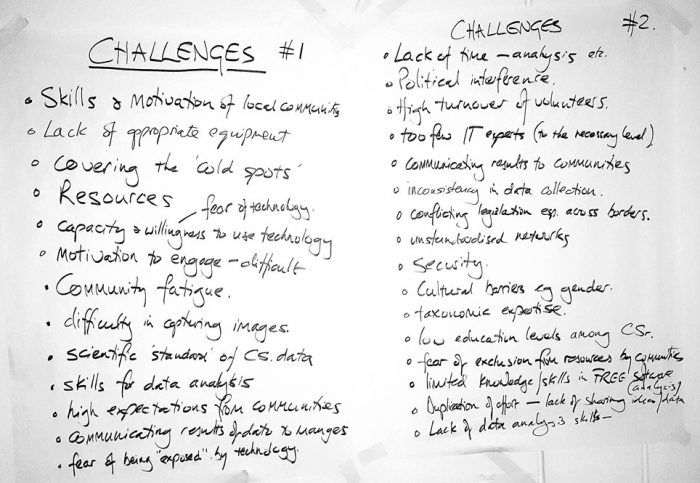 The main thrust of the course was the analysis of the data collected through citizen science projects. Dr  Rosie Trevelyan, who heads up the TBA, facilitated many discussions. This is the output from a session in which we discussed the challenges of  doing citizen science in Africa. 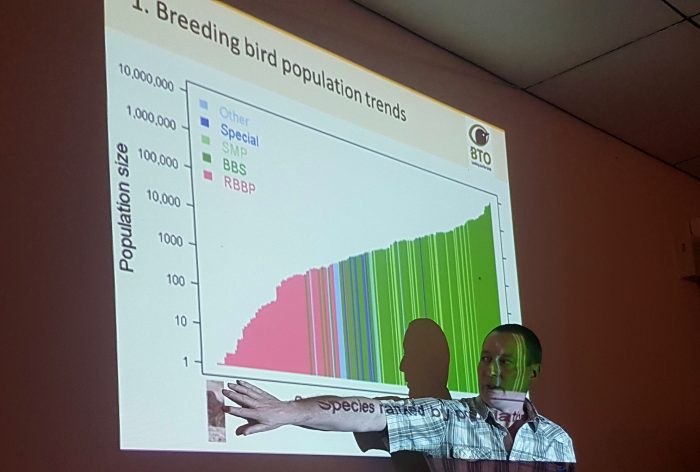 The participants were taken step-by-step through the basics of R, developing the skills needed to produce maps of their own countries in R. This part of the course was led by Dr Simon Gillings, of the British Trust for Ornithology. Here he is describing some of the outputs from the citizen science projects he is responsible for, dealing with birds in the UK. 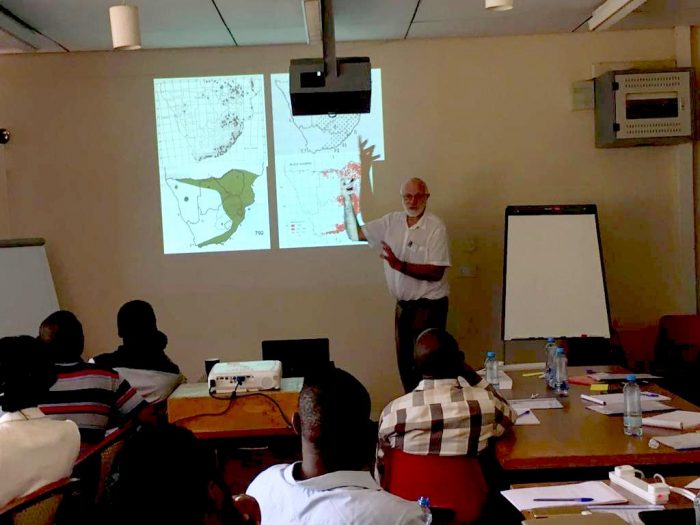 My own contribution to the week consisted of six presentations. This slide illustrates how ideas about the distribution of the Amethyst Sunbird chopped and changed. The truth emerged in 1997 as a result of the distribution map generated by citizen scientists in the first bird atlas. This is the map in the bottom right hand corner of the slide. 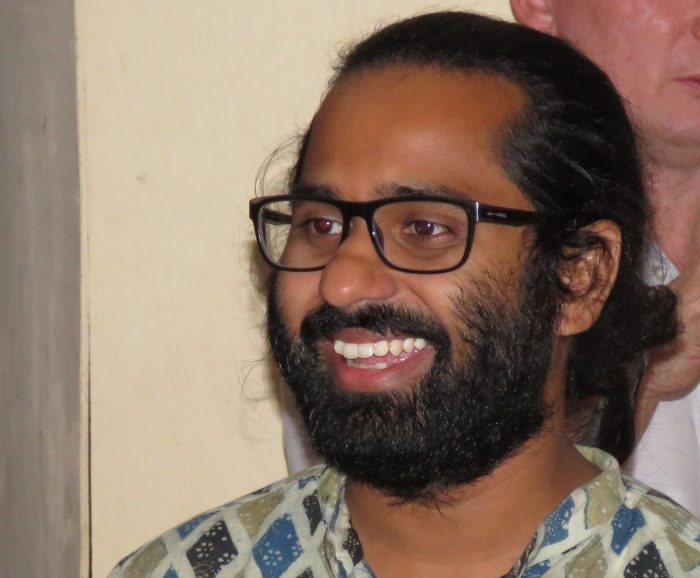 There were visiting lecturers. One was David Clarence, who is professionally an econometrician, and an enthusiastic contributor to the bird atlas project in Kenya. He has applied his statistical skills to the Kenyan bird atlas data, and he described to us the huge strides he has made in the analysis. 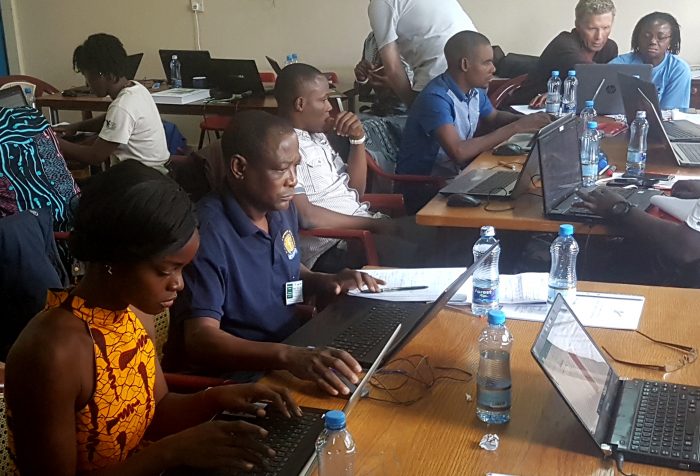 During the course, there was lots of time allocated to working on the datasets the participants had  brought with them. This enabled them to get help when stuck. 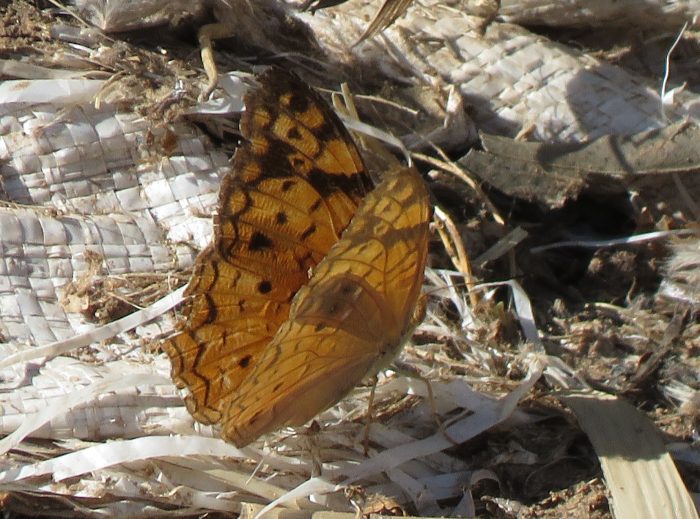 We spent one morning in the Nairobi City Park. In part it was a great excuse to get outside and in the sun, but more importantly it was an opportunity to test protocols for collecting data. City Park is an excellent resource for this kind of activity. This Blotched Leopard Lachnoptera ayresii was the first record for the species in LepiMAP, the Atlas of African Lepidoptera, for the grid cell (0136BD) into which Nairobi falls (see http://vmus.adu.org.za/?vm=LepiMAP-678745). Here is the map of the Nairobi grid cell (City Park is in the north-centre of the grid cell) and list of species for the Nairobi grid cell http://vmus.adu.org.za/vm_locus_map.php?vm=lepimap&locus=0136BD. Currently that list has 68 species.

Quite a large part of the museum precinct is natural vegetation. After the classes one day a group of participants found this horned chameleon. It got submitted to ReptileMAP (http://vmus.adu.org.za/?vm=ReptileMAP-170398) and was identified as Jackson’s Chameleon Trioceros jacksoni. 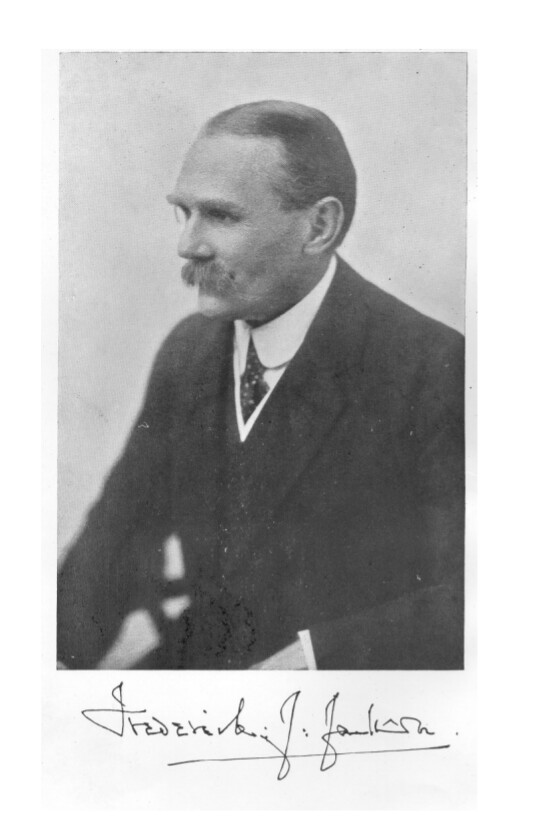 One of the participants on the course was Laban Njoroge, who is the entomologist at the museum. The museum’s collection of insects was on the same floor as our course venue, so Laban had the shortest distance between his office and the course! In the course WhatsApp group, Laban told us about the Jackson whose name is attached to this chameleon: “This man Jackson was a seasoned and passionate naturalist. In one of the AGMs of the then East African Natural History Society (now Nature Kenya, Nature Uganda and Nature Tanzania) he came up with an idea of making natural history collections. To kick start his idea he donated a drawer of butterflies. This is how the huge insect collection at National Museums of Kenya was started. This drawer still remains in our collection to date.” 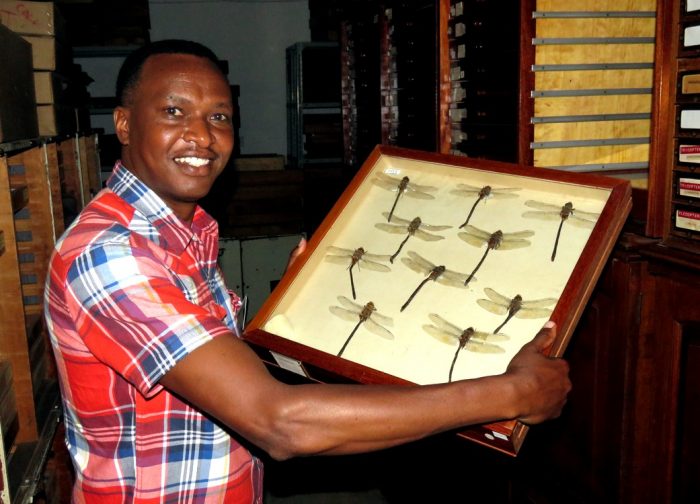 Back to Jackson’s Chameleon! It is astonishing that an animal like a chameleon can become a problematic invasive alien when introduced elsewhere. Chameleons form part of the pet trade, and some Jackson’s Chameleons were released in Hawaii.  Here is part of the abstract of the paper in the journal Biodiversity and Conservation featured above: “Native Hawaiian invertebrates, including four individuals of an endangered species, were discovered in the dissected stomachs of wild caught Jackson’s Chameleons collected from June to November 2009 on the island of Oahu, Hawaii. Jackson’s Chameleons were introduced to the Hawaiian Islands in the early 1970s. Of particular concern is the fact that introduced chameleons have previously only rarely been found in native Hawaiian habitat. One concern is that Jacksons’s Chameleons may be undergoing a range expansion into upper elevation pristine forests. If they reach and establish populations in these areas, devastating impacts to the native ecosystem are possible.” 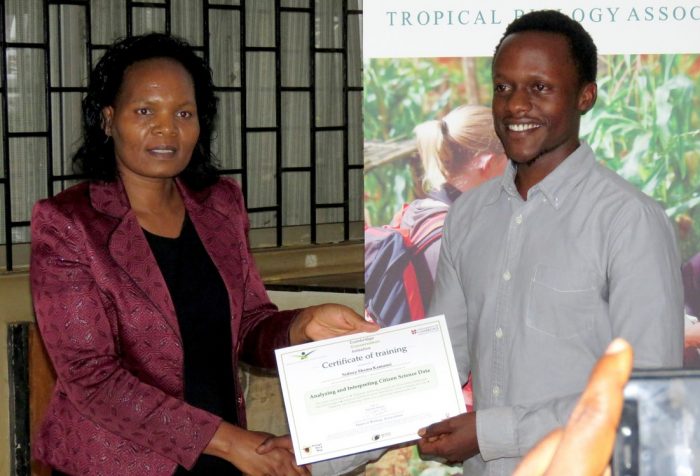 At the end of the course, each participant received a certificate. Here, Sidney Shema, who leads the bird atlas project in Kenya, is presented with his certificate by Professor Mary Gikungu, who is the Director of National Repositories and Research at our host institution, the National Museums of Kenya. Professor Gikungu is a entomologist specialising in bees.

Read the TBA’s own report on the course. It is entitled “Launching a new wave of citizen scientists.”

Thank you to Rosie Trevelyan  and Anthony Kuria (TBA) for the invitation to participate. It was a rich and rewarding experience. We hope that the BDI and the TBA can find ways to collaborate in the future.