View the above photo Record (by Wil Leurs) in OdonataMAP here.

The Great Hooktail is a large and striking species. The combination of its large size, distinctive colouration and lack of foliations on the abdomen render this species unmistakable.

Click here for more details on identification of the Great Hooktail.

Not much is known about the Great Hooktail. Mostly perches on trees both next to the water and in woodland above the riverbank. Often sits fairly high up. Also known to sit on the tips of reeds and sometimes on rocks near the water. Females have been observed depositing their eggs at rocky river sections with shallow, fast flowing water. It hunts from a perch and has a fast, powerful flight.

Most active from October to April. See Phenology below.

Paragomphus magnus is an uncommon and localised species. It was first recorded in South Africa as recently as 2012. It is listed as of Least Concern in the IUCN Red List of Threatened Species.

Very thinly distributed from northern South Africa, Zimbabwe and Mozambique up to Malawi, Tanzania and Kenya.

Below is a map showing the distribution of records for South Africa for the Great Hooktail. Taken from the OdonataMAP database as at February 2020. 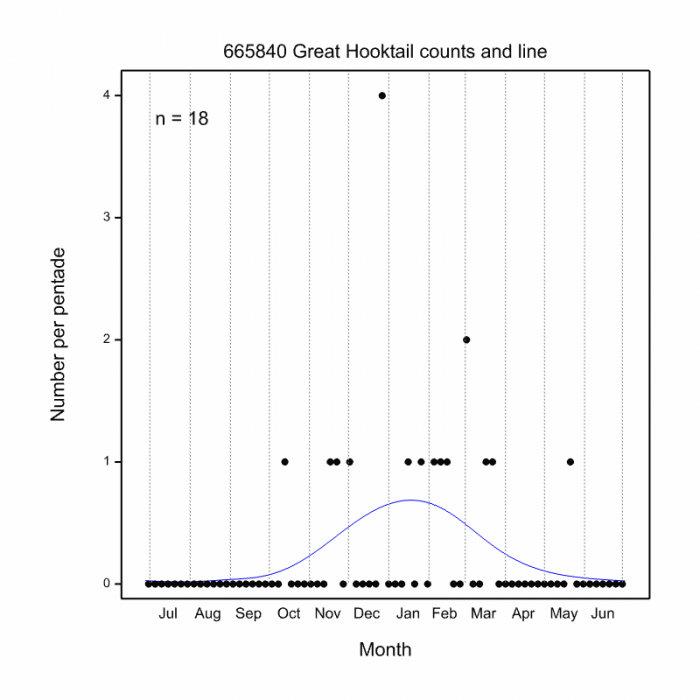