These pictures show a type of place which is known, in the trade, as a novel ecosystem. The original waterway, whatever it looked like, has been totally destroyed. No amount of  money can restore it. Whatever this place looked like in pristine condition, it is gone, gone forever. The original habitat that was here is extinct. It was replaced by concrete, which is biodiversity-hostile. 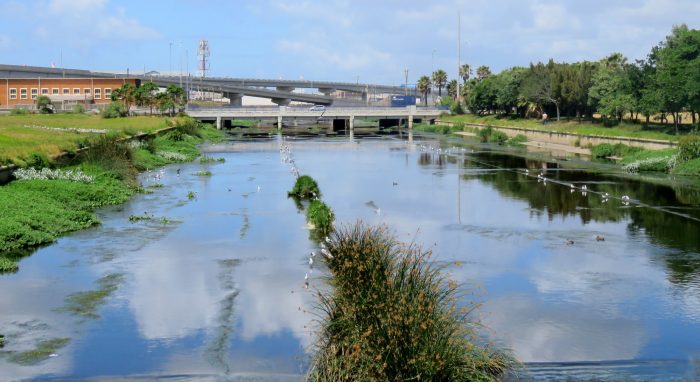 This is the Black River in Paarden Eiland, Cape Town. The photo is taken from the Section Street bridge. The bridge in the distance is about 200 m away and takes the N1 over the river.

How do we respond to this destruction? There are two alternatives: (1) Pessimism: Give up in despair; (2) Optimism: Try and get some biodiversity to flourish in this novel ecosystem. The second alternative is a massive compromise. But in places which are already irrevocably lost, it is forced upon us. The biodiversity of the novel ecosystem is likely to be controversially different to the pristine biodiversity. But, in the face of the biodiversity crisis, we might have to take the view that any (or almost any) biodiversity is better than concrete. Usually, we can do better than this, and that is what this blog is all about.

I visited this piece of the Black River because we were in Shoot The Dragons Week, and it was possible that there would be a few dragonflies here to photograph for OdonataMAP. But it was a bit cold, and I saw none. 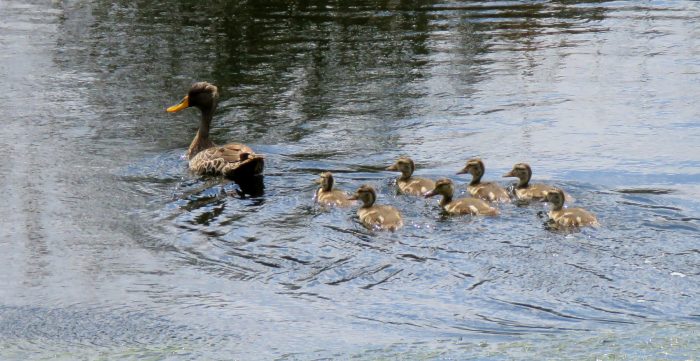 But then a Yellowbilled Duck emerged from the cover of the vegetation along the bank, followed  by seven ducklings. The family swam confidently downstream under the Section Street bridge. “Something is going on here.” 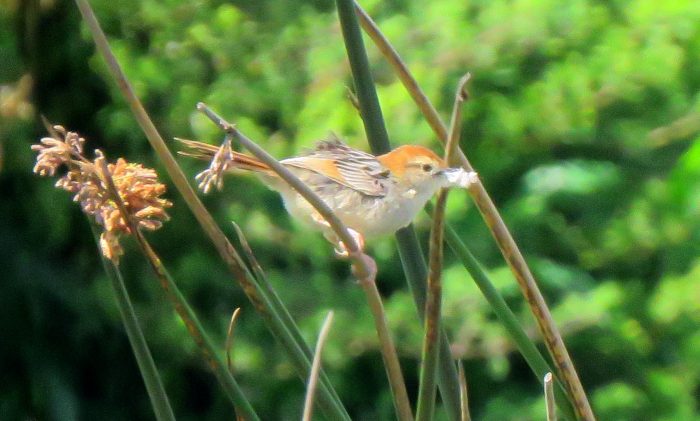 This Levailliant’s Cisticola perched on the top of some restios, faecal sac in bill. It must have removed this from a nest. So it is breeding here! A Pied Kingfisher flashed by with a fish in its bill. There must be fish in this river! 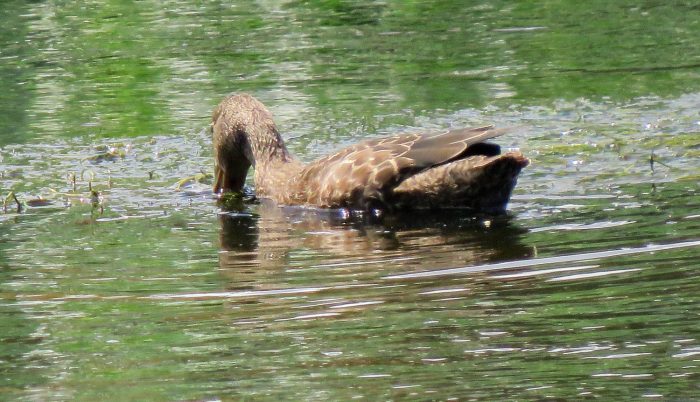 This Cape Shoveler was feeding in the submerged vegetation. 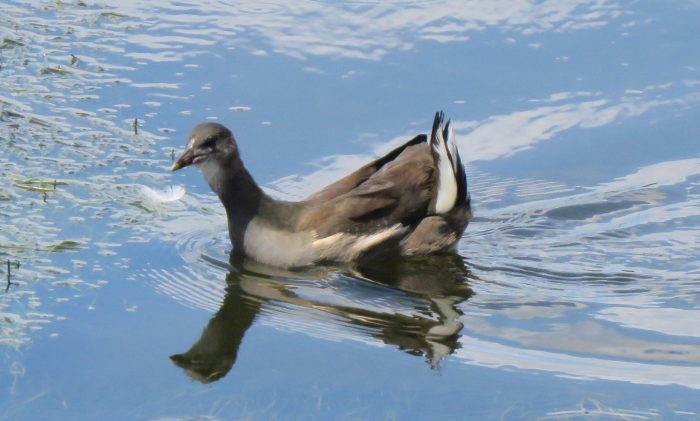 This Common Moorhen is a juvenile, probably just a few months old. It does not have the red and yellow bill of an adult. It probably hatched somewhere close by. 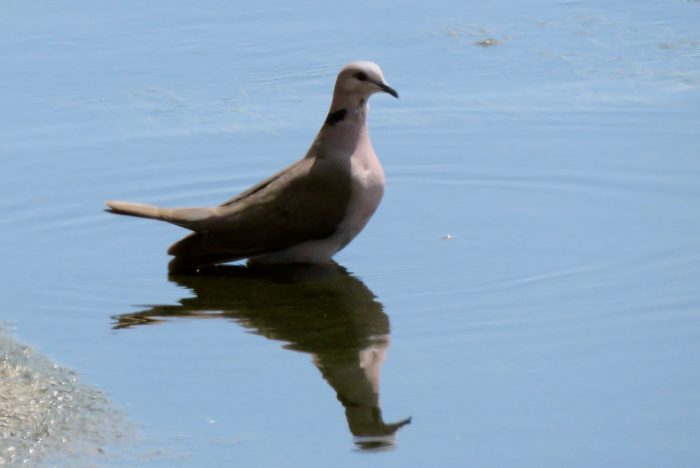 The Red-eyed Dove pretended it was a wader, and had a good drink. The water is effluent from the Athlone Wastewater Treatment Plant, about 4 km upstream. 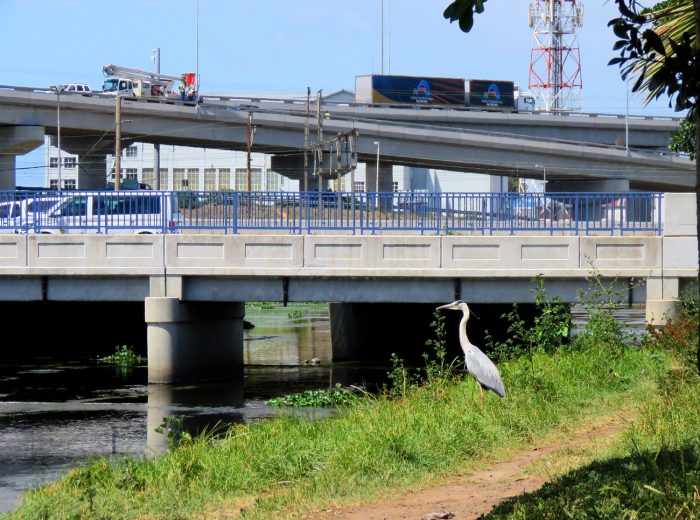 This Grey Heron was ignoring the traffic flashing by on the N1 – this is the Koeberg Road Interchange between the N1 and M5 – it’s a statue until a grasshopper emerges from the weeds to become a snack.

There were lots of other bird species, too. These made it into the BirdPix section of the Virtual Museum: Cape Wagtail, Hartlaub’s Gull, Kelp Gull, Hadeda Ibis, Southern Masked Weaver, Cape Canary, Common Starling, Karoo Prinia, Blacksmith Lapwing and Red-knobbed Coot. I missed White-throated Swallow, presumably breeding under the Section Street bridge, and Little Egret in transit.

Whether this is a novel ecosystem by design or by neglect, it is a remarkable 200-m section of the Black River. Judging by the number of species breeding and feeding, a small but significant component of biodiversity is thriving here. You don’t anticipate seeing a kingfisher flashing by. Nor a brood of ducklings. What makes this place so good? 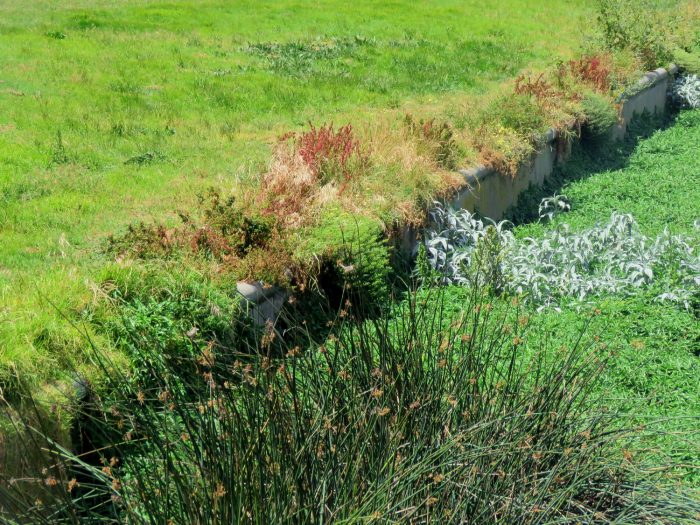 It’s so good because it is so untidy. An assortment of plants, some alien and some indigenous, has conquered the concrete. The walls that imprison the river are still there, but at least they are partially out of sight. It also has the advantage that the Black River provides a biodiversity corridor, linking an assortment of small wetlands to each other.

Whether it was planned or an accident, this novel ecosystem is a biodiversity hotspot. It is situated right on the edge of a rather miserable industrial area. This is where the people who work in all these factories, showrooms and workshops should come and eat their lunch. Somehow it is the exposure to nature and to biodiversity that encourages people to care about these things. Right now, if the City came along and cleared this waterway and mowed the grass with the blades set to 5 cm, no one would notice. Many would applaud the restoration of “neatness”. In reality, there should be an outcry. There should be oodles of protesting locals: “I love this place.  It restores my sanity every weekday. Don’t you dare put your big machines in it!”

I am grateful to Peta Brom for introducing me to the concept of novel ecosystems. You can read up about them on page 10 of her MSc thesis. It’s section 1.5.3!

So, if you live in Cape Town, this is the place to go for your next biodiversity outing. I’ll be back when it is warmer, and I am sure I will find some dragonflies. Here’s the map! 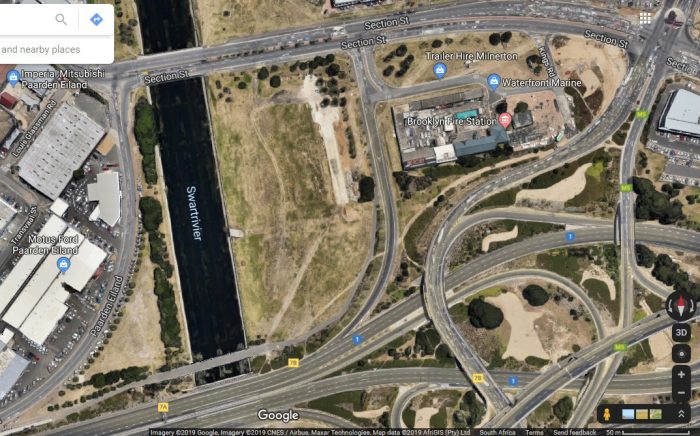 This blog is second in a series on “industrial biodiversity”. Industrial Biodiversity 1 covered another bleak area of Cape Town, Epping Industria. This is where the BDI has its workshop, and produces PanGoPods, which are off-grid, tiny homes.